Active Living Story: Roger lives with dementia and still enjoys a life with meaning and purpose

Active Living Story: Roger lives with dementia and still enjoys a life with meaning and purpose

Stories such as Roger’s are an inspiration to us, so we wanted to share it with you. To be able make a difference in someone’s life which has had a positive impact on not just Roger, but his family as well, gives us great personal satisfaction.


Briefly, Roger is living with dementia and needed 24x7 care so his family brought him to St Louis on Sea, our new shared home in Victor Harbor. After a few months of care, he improved so much that his wife decided to bring him back home for a trial stay, and they are doing well so far. With personalised and attentive care, we helped him to remember that even with dementia, he was indeed quite capable of living a life with meaning and purpose.


Read on for the rest of the story and what Marion, Roger’s wife has to say about his care.

“It was the care. They just put the care in 24x7 and they had him for three months. It was virtually one on one care – that’s what he needed and could not get that anywhere except somewhere that had a smaller number of residents like St Louis on Sea. He started playing table tennis, he was eating well and sleeping through the night.” Marion.

Roger lives with dementia and as someone who was always healthy, fit, active and a keen fisherman, he found some of the limiting factors of dementia very frustrating. His wife Marion was finding it more challenging to care for him. After a long stay in hospital due to an illness, his family realised they could not bring him home and needed professional care. His illness had sped up the development of his dementia and the family were told that his worsened condition had become permanent.

A smaller aged care residence where he would receive personalised and attentive care was a priority, so the family decided to bring him to St Louis on Sea in Victor Harbor. St Louis on Sea is an 8-private room shared home which specialises in dementia care and is located across the road from the beach.

Tailoring care to his specific needs

When Roger and his family came to visit St Louis On Sea, they were impressed with the warmth of the home, our philosophy and approach to care.

Roger was able to do much more than what was obvious upon meeting him. Our carers’ proactively seek to support people living with dementia to be as involved and engaged in life as possible. We adopt the Montessori approach with an underlying premise that every human being has the right to be treated with respect and dignity and to live their life with meaning and purpose, regardless of their age and ability.

“He needs to feel useful and the staff had him doing work, he loved it. Now I’m finding it possible to have him home for a while which I never thought was possible. They concentrated on things he loves like fishing. It’s made him happy and relaxed and he recovered some of his former self.” Marion.

With attentive care, we helped Roger remember that he had skills that could be put to good use. When he first arrived at St Louis on Sea, he was unhappy about living away from Marion. But he gradually improved, and after a few days he was participating and happily contributing to house activities and daily chores.

In about a week, he was:

“We assist people to live, not to exist”

Sherrill Bickmore is the care manager at St Louis on Sea, and in her words, “we assist people to live, not to exist.”

After a few months at St Louis On Sea, Roger’s wife brought him back home for a trial stay, adopting some of the care techniques she learned with us to help him stay engaged in home life. They’re managing well so far, and we wish them continued blessings.

Roger now remembers he is still capable of many things. By helping him reconnect with what he could do and what he enjoyed, he’s begun to enjoy his life again, lifting a great strain not only from his own shoulders but also from his family’s. Roger also plans to continue his relationship with the friends he made at St Louis on Sea by joining in the Day Respite Program on a regular basis.

“I’m able to have him home now because of the support and encouragement that he received there. They showed him respect and this was so important and made him feel human and worthwhile. This made a great difference.” Marion.

If you need day or overnight respite care, a short trial stay or want to move in permanently, please call us on 08 8552 1481 to arrange an onsite visit of our shared home. St Louis on Sea is an eight-bedroom home, each room with an ensuite. The home has state of the art facilities but feels like any traditional Australian home with warmth and love. It’s located across the road from the beach at Victor Harbor.

Call us on 08 8552 1481 to talk about the care needs for you or your loved one. Our office in Victor Harbor is located centrally at 31 Victoria Street, Victor Harbor. We’re a friendly team and you’re welcome to drop in for a cup of tea and a chat, and meet some other locals too! 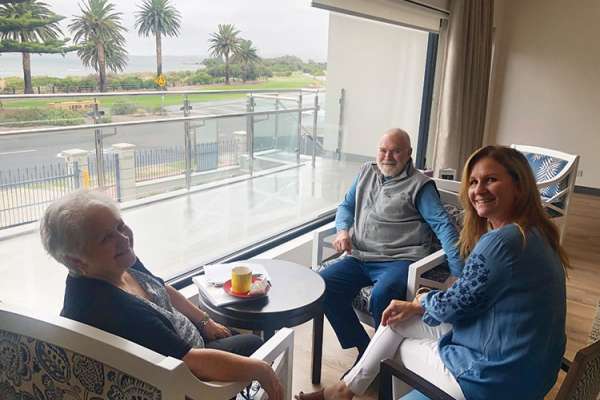