Never Too Old, Never Too Late. Anne's Top Social Events that Made Our Residents ROCK!

Anne Wicks is the Social Programs Coordinator at St Louis’ Nursing Home in Parkside, Adelaide. Over the years she has gone that extra mile and facilitated the wishes of many of our residents and created some very special moments for them. These are newsworthy moments, as you will see below:

When we asked Anne why she was compelled to organise some of these activities, this is what she said:

But with older people, it is very satisfying to see them experience something that gives them so much enjoyment. So I find out what that might be.”

Here are some of the special social activities that Anne has organised for our residents over the years:

We found a business down at Port Adelaide who have Harley Davidsons and take people for touring rides so this is what we did for Dorothea! She hopped on the back of the Harley and away she went.

From then on, for every birthday from 100-104 years, she had a Harley ride. At 105 years old, she did not think she could get her leg over anymore, so we opted for another motor experience.

The Clipsal was coming up so we contacted them and they arranged a chauffeur to pick us up. Channel 7 met us at there as they were very curious about this 105 year old lady who wanted a ride in a Clipsal car!

An 84 year old man was driving the car and Dorothea said that she was very impressed by the young man driving” – priceless! Dorothea did two laps around the course before the big race.
Dorothea was not only one of our oldest residents, she was also very willing to try out new things. When she turned 106, we had a little party at St Louis with a Dame Edna impersonator along with Coopers beer (her favourite) and oysters. She made a lovely speech and 8 weeks later she passed away. And we’ll remember her forever.

Tom and The Beach

Tom was one of our residents who came to live with us and he did not have family or much support in Adelaide. I remember one day we took him to Sellicks and drove right down to the beach and set up a beach shelter and fishing lines. He had not done this before and had always wanted to.

He rolled up his pants and sleeves and sat and fished for hours off the beach. Sometimes it is the most simplest of things that can make our residents happy.

When the time came for him to pass, we decided to have the funeral here at St Louis and the other residents and staff attended. He was not left alone at the end, he was with the St Louis family and his memory will live with us here.

Two of our clients were married and one lived in our nursing home while the other was still at their home. They wanted to renew their wedding vows so we arranged a wedding celebrant to conduct the ceremony. Afterwards our residents and their family attended a celebration complete with a wedding cake, a rolling pin for her and ball and chain for him.

Carol was one of our residents in her late 60’s who had terminal breast cancer. She had only ever worn Peter Alexander pyjamas – had a real love for them! We got in touch with Peter Alexander himself. He visited us on a trip to Adelaide in between opening new stores. He gave Carol flowers and a huge goody box of Peter Alexander items - shower caps, dressing gowns, PJ’s etc. She absolutely loved it.

Sometimes all they need to do is ask us. A couple of residents said they had never been on the tram so we took them on a tram ride to Glenelg and had lunch at a local restaurant. Happy days!

Ron was a resident who was colour blind and even though he did his training he could not fly a plane so he worked on the ground as support crew. As he had always wanted to be a pilot, we took him to the flight simulator in the city (North Adelaide), where he got to fly a plane inside the flight simulator and ended up landing in New York City – he was delighted!

Audrey our Resident and Audrey the Alpaca

Audrey is one of our more colourful residents and you have seen her on our Facebook page with purple hair. We went to Semaphore Pets and Garden where Audrey lives and were invited to return the following week when Audrey the Alpaca turned 1 year which we did.

Audrey the Alpaca was ordinarily rather aloof but not with our Audrey with purple hair. It was a genuine mutual connection, same first names or same eccentricity we are not sure, but a connection nonetheless.

I took four ladies to KI for a few days - Nola, Barb, Marjorie and Dorothea. The locals spoilt us for great food including fresh oysters and local wine with loads of activities and everyone loved it. It was fun for all of us.

Swimming for our Swimmers

Muriel, Ross and Sue are three of our residents who we take swimming regularly. They were all dedicated swimmers in their younger years.

Ross is paralysed on one side and unable to walk, but in the pool he was actually walking and swimming on his own – he felt amazing. Sue has advanced dementia and now cannot walk unaided anymore but in the pool she felt liberated and loved it.

Muriel used to be a synchronised swimmer and adores being in water. She has dementia but in the pool none of this is a concern as she swims on her own with a little bit of support.

All these moments give us immense satisfaction and we do it because we enjoy seeing our residents happy and enjoying these latter years of their lives. We are never too old and it is never too late!

We have a 45 bed small boutique nursing home in the leafy suburb of Parkside in Adelaide. Call us on 08 8272 3344 to find out more about our facilities, services and social programs. 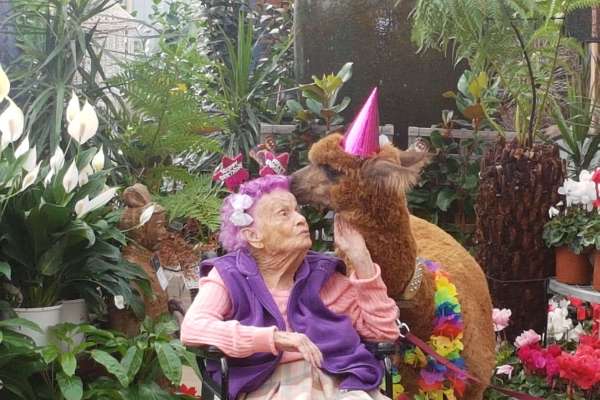