Pecking Disorder by Robert Moore will be launched on November 16and is a story based on his experience of growing up in Tasmania on a family hop farm. Robert is a widely published writer of poetry, plays, articles, short stories and children’s books, and he’s also a home care client of St Louis.

In a conversation with Robert, he discusses how his home care package not only frees him up to do what he loves which is writing, he’s also had more work published since having this additional support.

We interviewed Robert about his upcoming book.

What inspired you to write Pecking Disorder?

Pecking Disorder is based on the story of my family. There was a lot of story to tell and plenty of drama - two gay brothers growing up in a conservative rural environment in Tasmania in the 1970’s!

You could not come out and say that you were gay. You were always asked if you had met a nice ‘sheila’ and when you were going to get married.

As a gay person in Tasmania in the 1970’s, you braced yourself while hiding behind what was considered normal in our community. The word ‘normal’ was often used, it was the vogue expression. My father once said of a person in our community who we knew had committed acts of domestic violence – at least he’s normal! To be gay was considered far less normal than someone who beat up members of their family.

The family farm was going to be passed onto my brother who was the first born. He was a champion rower in Tasmania, was well known and engaged to be married, but he was leading a double life.

My parents found out he was gay through my brother’s fiancé after he broke off the engagement. It was a shock for them and their reaction was ‘what will people say?’ – they had a reasonably high standing in their local community so they concocted a story that my brother had falling out with my father and left the family farm. It was a traumatic time in our family.

The first born had left and I was next in the pecking order, which is why I called the book Pecking Disorder because it was all rather displaced. I was second born and male, I was not the chosen one and not as worthy, but the preparation began for me to take over the family farm and I was groomed appropriately. History was repeating itself once again.

I was dealing with being gay in my own way, listening to people speaking about gays in derogatory terms such as ‘poofter’ and ‘camp’. I was terrified of admitting I was gay, there was so much at stake. My sentiments back then were that my family had been hurt in such a disgusting and abominable way so my duty was to do what I was asked - mind the coop, look after my parents and make sure they didn’t suffer anymore.

My father asked me some days later after brother departed if I was gay and I did not admit it. I was fearful and wanted to protect myself and family. I feared violence, rejection, and the consequences of being openly gay in a world that would not accept it.

There was so much tension, drama and secrecy and eventually it had to explode out of me onto the page. I never openly acknowledged being gay with my parents although they suspected. I wrote about it after they had died, and that’s how Pecking Disorder came about.

The story has a ‘Happy For Now’ ending as opposed to a ‘Happy Ever After’ ending, the journey continues and that’s just life.

A brief synopsis of Pecking Disorder

It is 1971 Hobart, Tasmania. Ross Mayne is about to turn eighteen. He is boarding at Yurnadinah, an education department hostel to complete Year 12. He has been away from the family hop farm for a month. The night before he returns home an unexpected liaison with Michael Nichols, sends him into a spin.

An anxious weekend of discussions, disclosures and secrets unfolds. Phillip, Ross’s older brother leaves home in a hurry. Fearing what people might say, the Mayne family fabricate a story about Phillip’s departure. Ross is offered the family farm, something that has always been Phillip’s birthright.

Ross experiences contradictory feelings. Some set him free. Others imprison him. While his eighteenth birthday is soon to be celebrated, he is conscious of upholding and protecting the image and beliefs of his parents. He relegates his own desires to a challenging second place – a place where there is plenty of ammunition to destroy a sensitive soul.

Ross has an ear for music and loves ‘to get away from it all’ by improvising on his piano. This gift produces spectacular results during difficult times. Ross’s music teacher encourages him to play an original composition for a school assembly.

Ross comes home on a weekly basis to help the family flock regroup. His feelings for Michael blossom and are reciprocated. A teacher counsels him and he visits a GP and psychiatrist. However, there are more demands after his sister Fiona drops a bombshell to rival Phillip’s. Ross stays at the hostel the weekend prior to his eighteenth birthday.

In chapter thirty-five, the final chapter, Ross and Michael have a passionate heart to heart encounter on Queens Domain above Hobart.

Ross is unprepared for Michael’s revelation about his own family.

Pecking Disorder will be launched with book signings and refreshments provided. 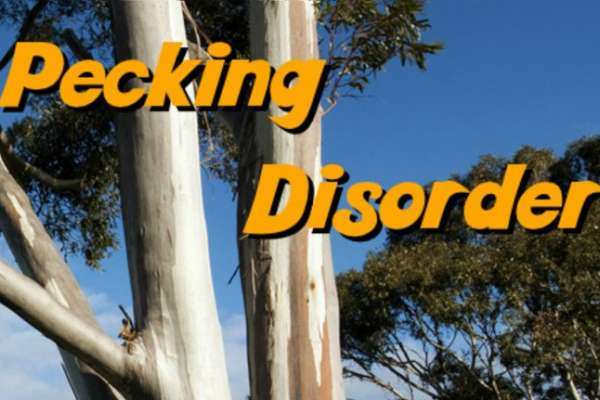